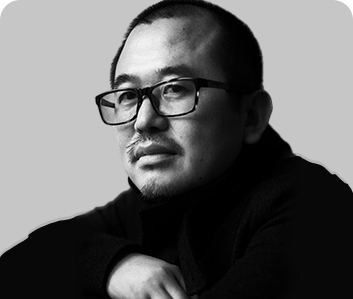 Liu Ruowang is a young artist growing up after the Reform and Opening up of China, he walked into the provincial capital city from a small poverty village in mountain of Western China through pursuing his education and later into the Capital of China. Finally, he became a professional artist. He became a shining star in Chinese art circles since 2005 and with groups of sculpture artworks and one after another exhibitions, he became an influential young artist with the international reputation. His artworks have been exhibited around the world in, except for Beijing, Shanghai and other Chinese inland cities, Singapore, Seoul of Korea, Queenstown of New Zealand, Venice Biennale of Italy, the University of Turin, Naples Municipal Square, Galleria degli Uffizi & Piazza della Santissima Annunziata, Florence, the Armory Show of New York, USA, Campell of France, Schleswig-Holstein of Germany and other places. He has many series of representative artworks, including Wolves Coming, The East is Red, The People, Heaven Soldier, Lofty Mountains and Flowing Water, Lofty Mountains and Flowing Water, The Original Sin, Dodo and others. The "Wolves Coming!" of Liu Ruowang in Florenrivilege after World War II" by the Galleria degli Uffizi & Piazzace Exhibition was planned and exhibited by the Galleria degli Uffizi, and he was rated as "the first artist with the p della Santissima Annunziata.